Now I am in my early 40s I believe it is safe to say that depression and anxiety have been part of me for most of my adult life.  On reflection, I can understand now, some of the decisions I’ve made so far have been driven by the underlying depression that has lurked within me.  I wouldn’t change or regret a second of it because every wrong turn has made me the person I am today and I wouldn’t change me!  I’ve had a failed marriage, a now broken long-term relationship (that lasted longer than the relationship with my ex husband ever did).  So I find myself in my early 40s alone and childless.  I have accepted this situation and can honestly say I am happy!

That certainly hasn’t always been the case, despite what I tried to believe.  It was only in 2014 that I could no longer hide the emotions and feelings that had obviously been simmering away under the surface for 40 years.  In June 2014 I lost my voice.  I was signed off work and told I needed voice rest and that talking was likely to cause permanent damage to my vocal cords.  As the months passed, with each and every sick note, I did begin to fear it might be something more serious.

After a two week holiday of a lifetime (with my long-term partner) I finally mithered my doctor to refer me for tests.  The throat specialist told me there was no long term damage and referred me to a speech therapist.  She described me as having “low mood”.  Well of course I had low mood; I’d been signed off work for four months, just come back from an amazing holiday and was still had no voice and was still feeling unwell!

It was only when I broke down at my hairdressers in the November that she pointed out she thought I was depressed having recognised the signs from how she had once felt herself.  She made me ring for an appointment there and then and did offer to come with me but I told her I would be fine.

I was given a label I didn’t want to accept at first and prescribed medication that would help me.  I officially had depression!  I could no longer shy away from it even if I tried.  The depression, the anxiety and the panic attacks all rolled into one and took over my life, consuming almost every moment.

I lived over 70 miles from any of my family, with my partner and his two grown up children.  I know I won’t have been easy to live with as I would spend days hiding away in bed, alone and away from the real world.  The occasions I did venture out I was consumed with fear having panic attacks in supermarkets and on busy trains.  There were times that I thought I couldn’t live with myself and didn’t want to – but I did!

As the medication started to kick in, the fog in my mind began to clear just enough for me to compose my thought process.  I was able to identify the immediate factors that were causing me the upset, stress and anxiety.  They could all be changed but I just didn’t know how so as I lay alone I began to look at my options.  Yes!  I had options but I still wasn’t confident I could make the changes.

With the support of my director at work I was able to implement the first change, returning to work under a different manager.  It was very hard, but I was taking those first steps.

Then on April 1st 2015 I walked away from my old life completely and started a new.  It’s been a difficult period of my life but from hitting rock bottom, I believe I have rebuilt the best version of me there ever has been!  By the end of April 2015 my voice had finally returned.  Losing my voice was my body’s way of stopping me in my tracks and making me face reality!

There is no way I could have done it alone and every day I give thanks to my amazing family and friends  who have given me the strength to carry on.  I am now in the process of reducing my medication with the hope that one day I will be able to live without it as a crutch.  I don’t know if that will ever really be possible but I intend to give it the best go I can.

My journey with depression and anxiety will never be over but I now accept that we will walk hand in hand and I will control it, not it control me.

I now hope to share my experiences and the tools that have helped me almost feel ‘normal’ again.  Its been a slow process but I’ve taken it 1 step at a time and keep putting 1 foot in front of the other, left foot right foot.

If my experiences can help you, then it has all be worth it and I would not change one thing.  I am grateful that depression has been a chapter in my life. 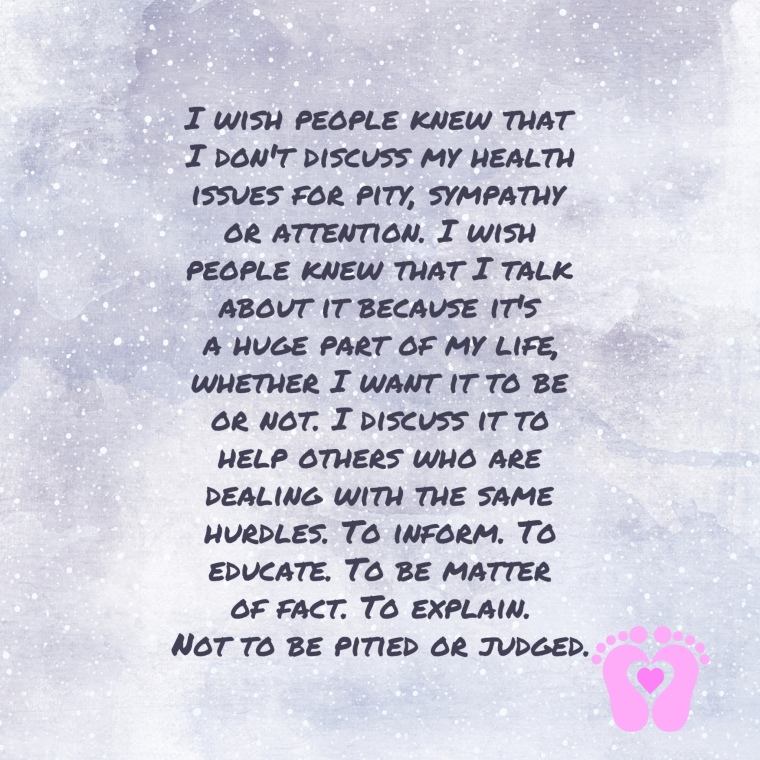